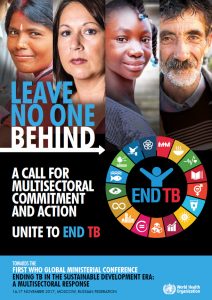 About one third of the world’s population is infected with tuberculosis (TB) bacteria. Only a small proportion of those infected will become sick with TB. People with weakened immune systems have a much greater risk of falling ill from TB. A person living with HIV is about 26 to 31 times more likely to develop active TB.

One of the targets of the Sustainable Development Goals for 2030 is to end the global TB epidemic. The WHO “End TB Strategy”, approved by the World Health Assembly in 2014, calls for a 90% reduction in TB deaths and an 80% reduction in the TB incidence rate by 2030, compared with 2015.

New data from WHO reveal that the global TB burden is higher than previously estimated. Countries need to move much faster to prevent, detect and treat TB if the “End TB Strategy” targets are to be achieved in the next 15 years.

Go to http://www.who.int/campaigns/tb-day/2017/en/ for more information.